The ‘Dover College War Memorial and Endowment Fund’ was founded after the First World War to buy Dover College from its original private founders and set it up in its current charitable guise.

The Fund was reopened after the Second World War to fund the return of the College, back to Dover from ‘Poltimore’, where the College was evacuated to back in 1939.

The residue from the Memorial Trust continues today, and makes modest contributions each year to the College for selected purposes, the most recent being the statue of Captain Billy Neville Capt.

This was duly unveiled by The Chairman or the board of Governors, Mr Micheal Goodridge MBE,  on Armistice Day 2018 in front of School House during the Chapel service.

To not only remember Captain Neville, who was killed in action on the 1st July 1916, leading the famous ‘Football charge’ on the first day of the battle of the Somme, but also the other 177 Old Dovorians who were killed in action during the ‘Great War’ 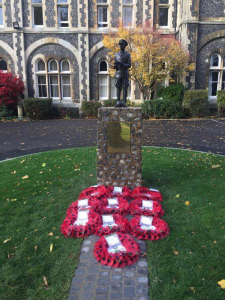 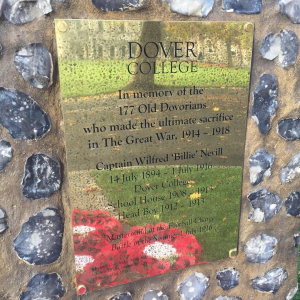 The ‘Dover College War Memorial and Endowment Fund’ is administered by a committee, which comprises of 4 members who are reelected every four years.